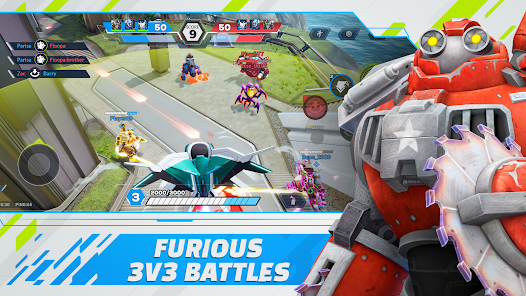 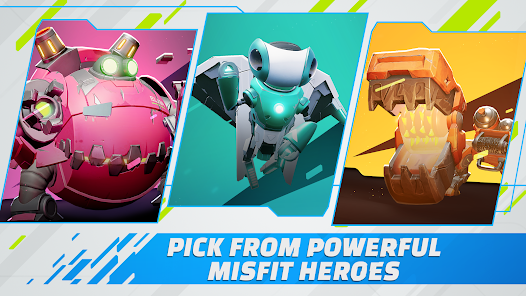 Thanks for playing the pre-release build of ArcForce. The final game content may differ.

MASTER A SQUAD OF MISFIT HEROES: Pick from a roster of lovable oddball heroes, including a mad scientist’s spider mech, a decommissioned Soviet mining bot, and the ultimate ‘junkyard dog’, Diesel. Find the one that best suits your personal playstyle and then level them up to unlock new skins and perks.

BECOME THE HERO YOU WISH TO BE: Personalize each hero with colorful and quirky skins that unlock as you play. With every beloved character, you can also add meaningful perks which allow you to level up your defense, improve your cooldown speed, or increase your damage.

TAKE DECISIVE ACTION IN CHAOTIC BATTLES: Blast your foes with autocannons or slice and dice them with Bladestorm. Manage your cooldowns and strike when the time is right to make the clutch play. Unlike other PVP shooters, you’ll need both brains and brawn to master the mayhem in Arcforce, because one decisive move can tip the balance and win the day.

BAND TOGETHER IN MULTIPLAYER 3V3: Play online with friends or matchmake with other players in real-time multiplayer battles. Discover unique synergies between characters to build an unstoppable team. Dominate the leader boards together because true heroes fight as one.

FIGHT ACROSS A WORLD ON THE EDGE: Rise up and fight for humanity’s future in distinct battlefields shaped by climate change – from the frozen streets of New York City to the machine graveyards of the Sahara and the gleaming cyberpunk metropolis of Tokyo.

PLAY NEW AND CLASSIC PVP MODES: Compete against other players in objective-based game modes. Destroy your foes and capture points in Team Deathmatch and Hardpoint. Hold off enemies while gathering valuable crystals in Shard Rush.

FRESH CONTENT COMING UP: New heroes, new maps and modes, new cosmetics, and rewards arriving every season! Every week, a new digital comic book will be released on the battle pass for free that will expose stories about ArcForce’s heroes and world.

Thanks from all of us at the ArcForce team for playing our pre-release build. The time you spend in-game will help us to deliver a best-in-class final product to our fans by empowering us with practical testing data. We expect this pre-release phase to last approximately 1–3 months. The full launch date is TBD.